In his free time he enjoys the great outdoors including fishing, hunting, and hiking. He shares his home with his beloved rescue dog, Bo. 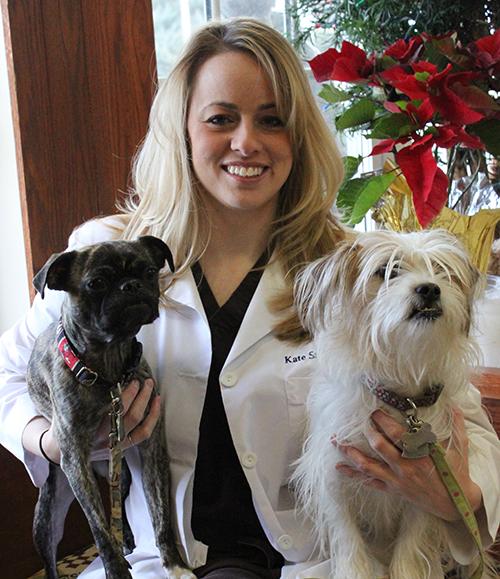 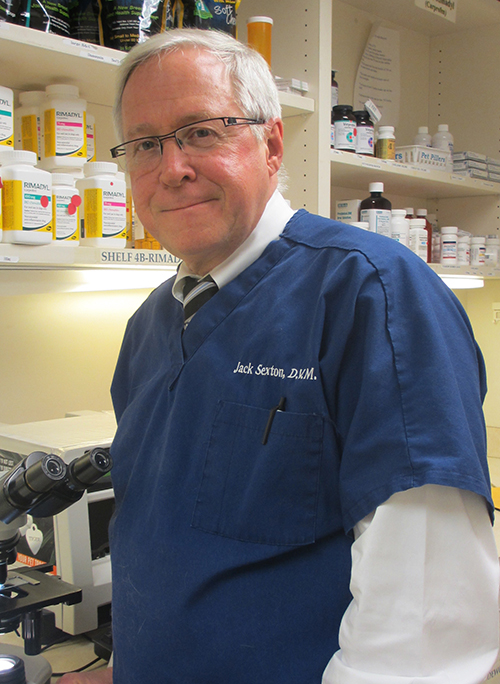 Dr. Sexton has served as president of both the Northern Virginia and the Virginia Veterinary Medical Associations. He has served as a member of the Fairfax County Animal Shelter Advisory Committee and is a volunteer at that shelter. In addition, he has supported various rescue and humane groups in their efforts to further animal welfare. The Sextons share their home with three dogs.

Dr. Stork has been a resident of McLean since 1966. He received his Bachelor of Arts in Biology from the University of Virginia and his Doctor of Veterinary Medicine from Virginia Tech in 1986, joining McLean Animal Hospital as an associate after graduation.

His special interests include running, golfing, and skiing. He also thoroughly enjoys participating in his children’s school and after school activities. His wife, Ellen, is also a veterinarian. The Storks share their home with 1 cat and 2 dogs and one son and one daughter.

Dr. Norway joins us from Central Florida, having spent recent years practicing in the Orlando area. She earned her Bachelor of Science degree in Animal Science from Cornell University and graduated from the University of Florida College of Veterinary Medicine in 2000.

She and her husband, Rob, have two sons (one a Washington native) and a Border collie mix named Hula. They are glad to be back in Northern Virginia with its many opportunities. 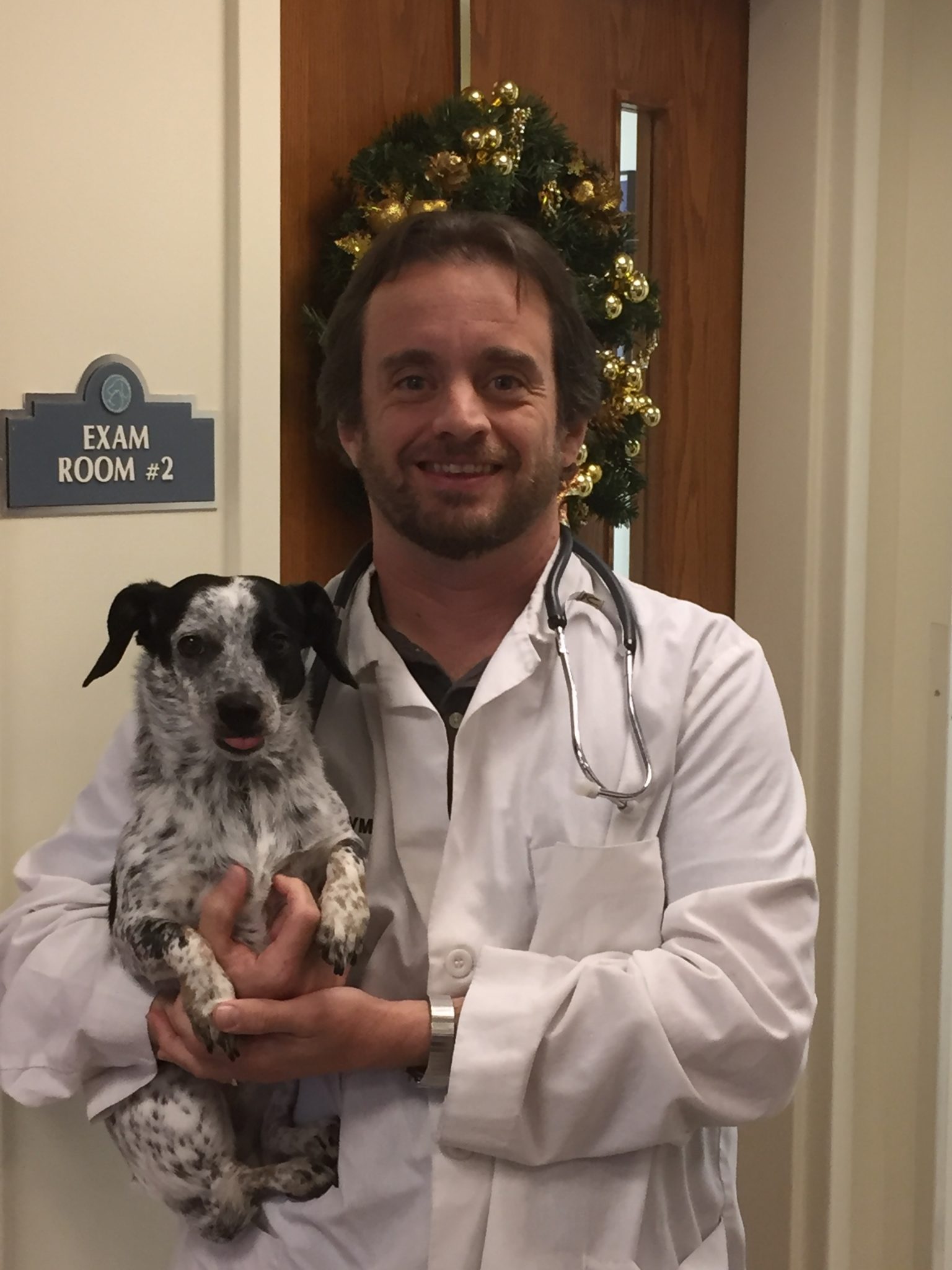 Dr. David Clark joined the practice in September of 2016, after relocating from San Francisco. He graduated from U.C. Davis in 2003, after doing his undergraduate training at Wesleyan University in Connecticut in 1996, and a Masters in Animals in Public policy through Tufts’ School of Veterinary Medicine in 1999.

Upon graduating from Davis he worked at a wide variety of hospitals throughout the San Francisco area. He and his wife, Lindsay – have two children – Isadora – age 9, and Griffin age 5, as well as two cats – Icarus and Squig. Although they all miss California, they felt it was important to raise the two children closer to family – who live in Arlington, and are generally spread up and down the East Coast.

Outside of work, his interests including camping, hiking, running, as well as anything involving the beach – swimming, snorkeling, surfing, and laying in the sun! 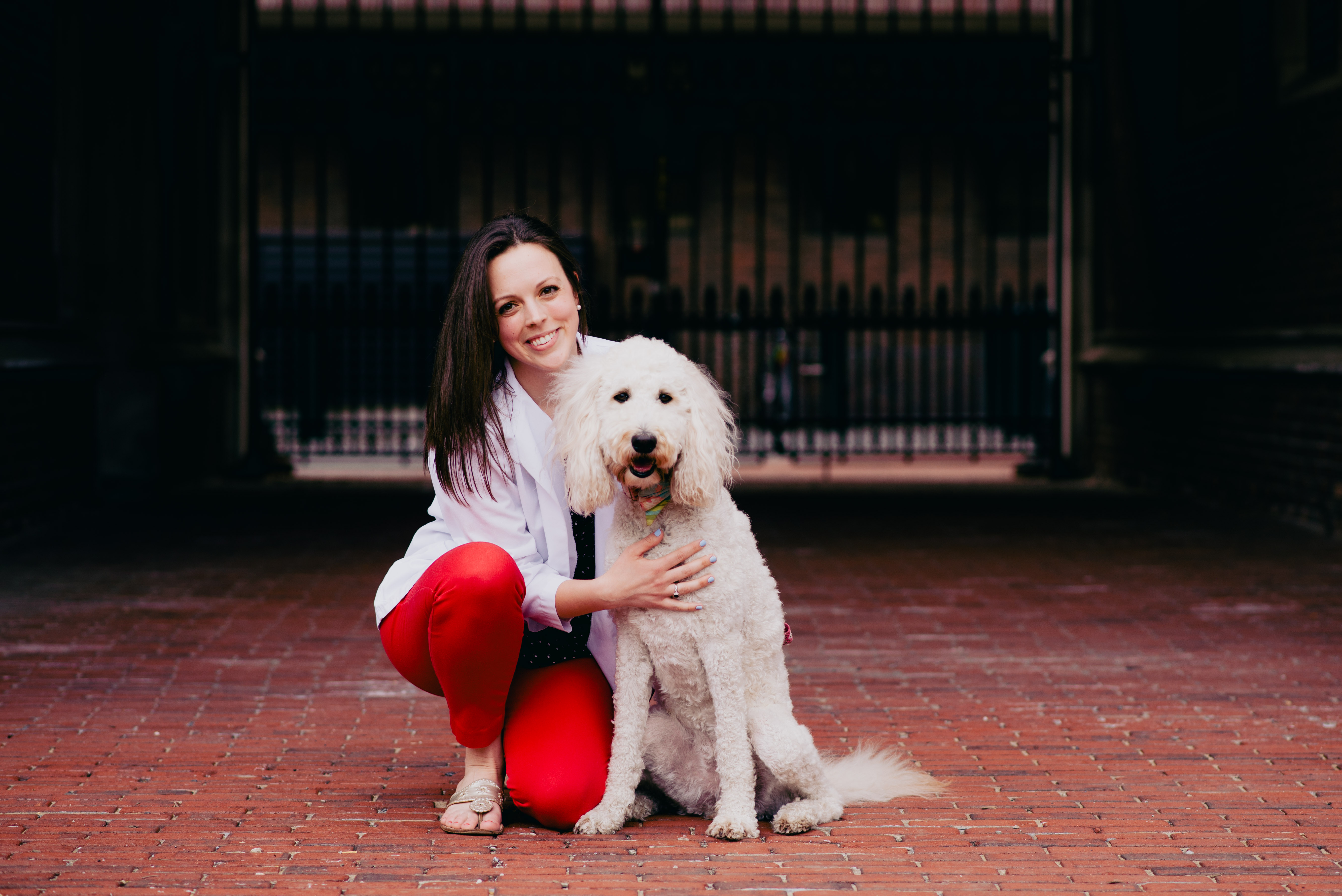 Her interests include dentistry and oral surgery and internal medicine. She is passionate about preventative care to ensure our pets are living their best, and healthiest, lives. Outside of work, Dr. White enjoys cooking, exploring DC, and hiking with her 5-year-old Goldendoodle, Piper.

Dr. Sullivan is a northern Virginia local who grew up in Chantilly, VA. She received a Bachelor of Science in Biology from the University of Virginia. She then ventured south for her Doctor of Veterinary Medicine from the University of Tennessee College of Veterinary Medicine where she graduated as the co-valedictorian of her class. She is ecstatic to return to the area and to be joining the great staff at McLean Animal Hospital.

Dr. Sullivan's passions in veterinary medicine include preventative care, feline medicine, management of chronic disease, and the human-animal bond. Upon graduating from the University of Tennessee she received the Senior Student Award from the American Association of Feline Practitioners, and is a proud member of their organization.

Outside of work she enjoys spending time doing anything outdoors, live music, being with friends and family, and snuggling with her two kittens Pickles and Olive.

Susan began working in the animal health care field in 1975 in northern California. In September of 1994 she began working at McLean Animal Hospital. She started as a receptionist, then office manager, and since 2005 as the practice manager.

Susan has a Certificate in Veterinary Practice Administration from AAHA , Perdue University. She has 3 cats Eblis, Jackson, Maestro, and one Dachshund named Charlie.

Susan has one daughter and two granddaughters, one who lives in the area and one in Idaho. Besides her love of animals and animal related causes she loves container gardening, cooking, movies, music, reading, and hopes to start doing a lot of traveling. 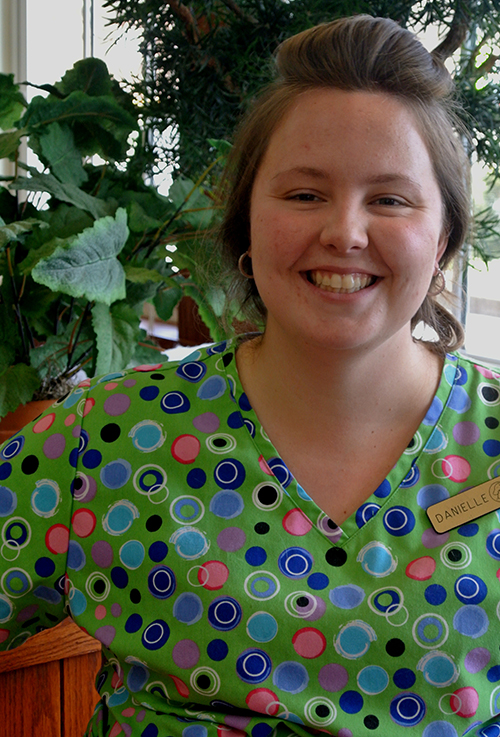 Danielle joined our team in January 2008. She has always loved animals and while working as an assistant went to school and graduated in 2014 from Northern Virginia Community College Veterinary Technology Program. Other than animals, her hobbies include scrapbooking and baking. Danielle loves to bake and she is amazing at it! She can make a cake that is too beautiful to eat and could rival the best on Food Network Challenge! She needs to open a dog/cat bakery to fuse her two passions. She has 2 cats, Baxter and Jasper.

Megersa joined the MAH family in July of 2012. He was born in Ethiopia and moved to the states with his family in 2003. He has more than two decades of professional experience in Veterinary Medical Sciences and Laboratory Medicine. He earned multiple degrees including A.A.S, BA and Masters of Public Health (MPH). Upon graduating from Northern Virginia Community College Veterinary Technology Program in 2007, he worked at a wide variety of hospitals throughout Northern Virginia. He currently does not have any pets because his sons keep him pretty busy! 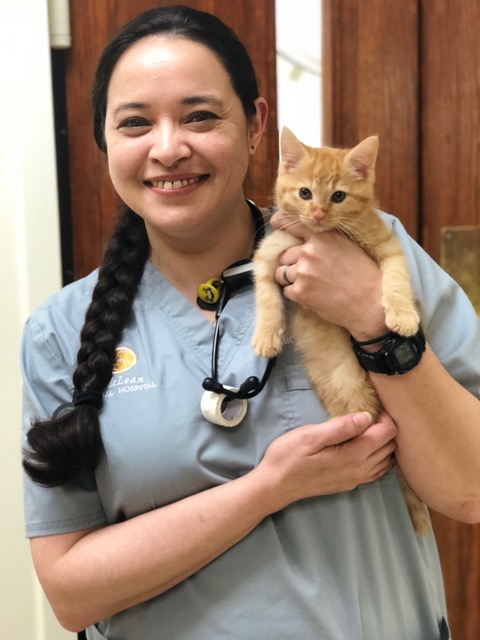 Michele is a native Northern Virginian who started her career in Veterinary Medicine here at McLean Animal Hospital in 1998 as a CSR. Getting “bit by the veterinary bug”, she decided to go to tech school and graduated from NVCC and passed her boards in 2001. She has spent the last 17 years working in emergency medicine for a veterinary specialty practice. She has a special interest in anesthesia/analgesia and all things emergency related. In her spare time she can be found outdoors, whether it’s fishing, camping, kayaking or her favorite pastime, horseback riding. 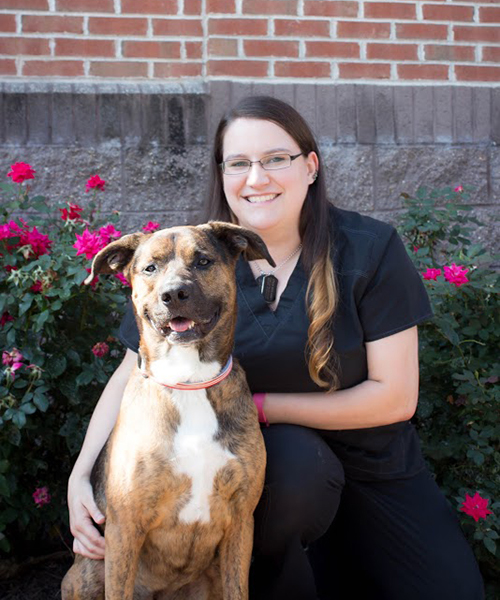 Shilo has had animals ever since she was young and never had the idea of working with them until a family member suggested she try it. She has loved her work ever since she started at McLean Animal hospital in August 2013. Shilo has 1 dog at home, Sadie. 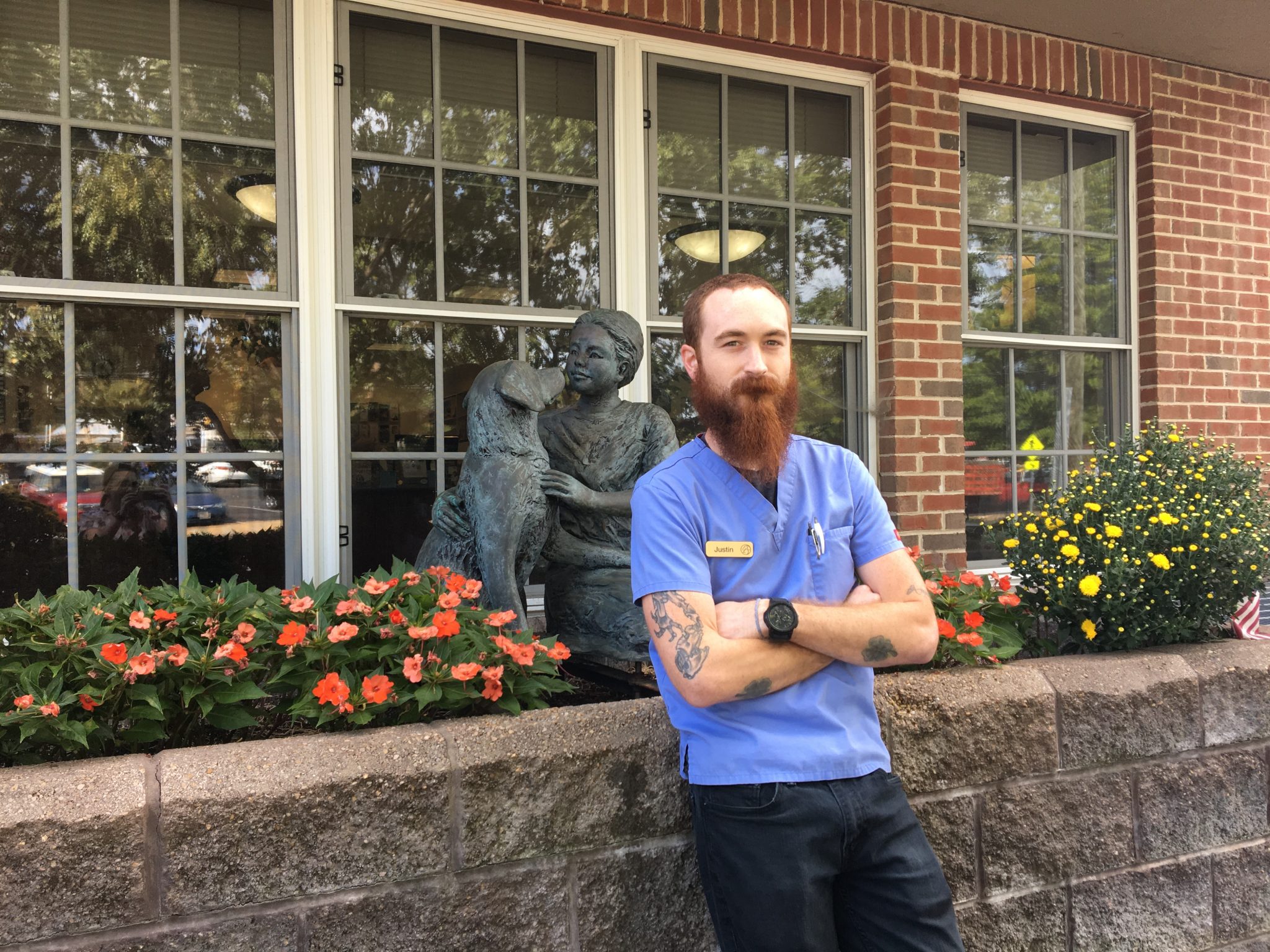 Justin has worked in the veterinary filed for many fortnight (since 2008). He is a jack of all trades and enjoys working on his truck. He lives with his girlfriend Sierra, who is also in the biz. In their free time, they like to explore the great American outdoors. They share their home with three cats, Killian, DiNozzo, and Monkey, who enjoys watching Kitty TV (a hamster named Jack Skellington). 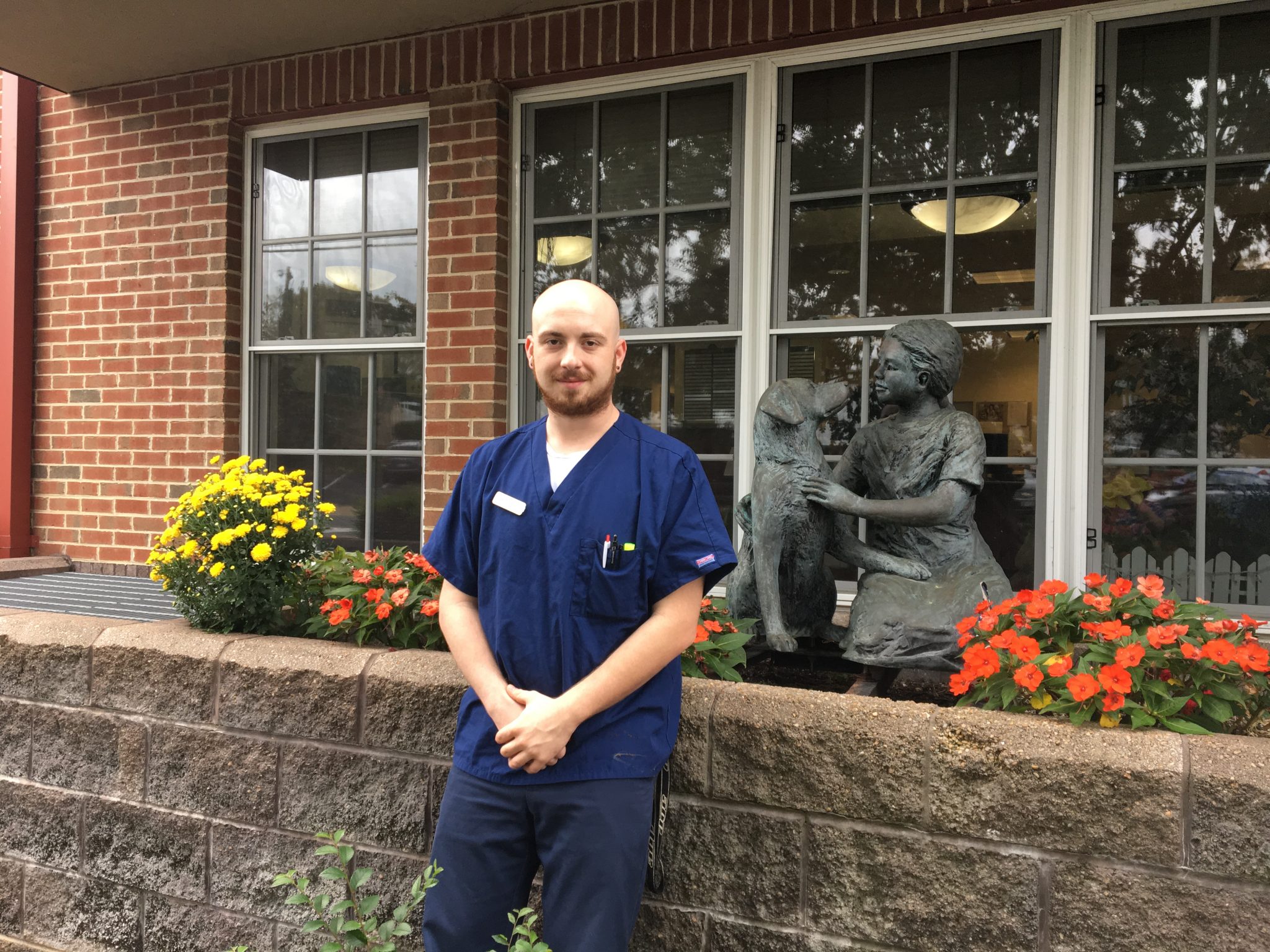 Greg has been with us since June of 2017. He is originally from and still lives in Bethesda, Maryland with his two dogs, Sam and Josie. In his free time he likes to do competitive paint balling and he plays rugby. He has worked with children in the past and made his way over to working with dogs and cats. 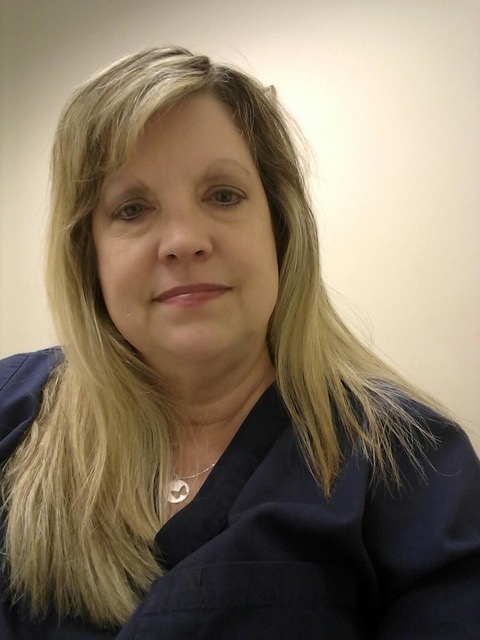 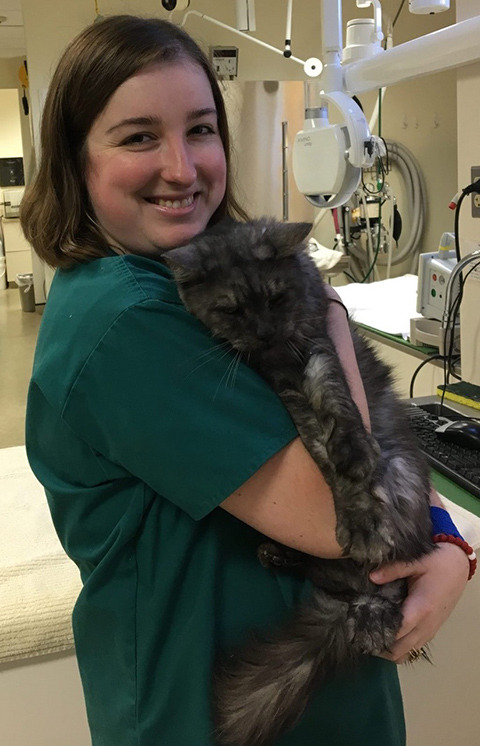 Allison has been with us since July of 2017. She has a BA in Psychology and a minor in Criminal Justice. Since she was young, she wanted to work with animals and has just recently started doing what she loves! She loves photography, baking, and reading comic books. Her goal is to go to school to become a Licensed Veterinary Technician, but since she is passionate about photography, her dream is to become an animal photographer. 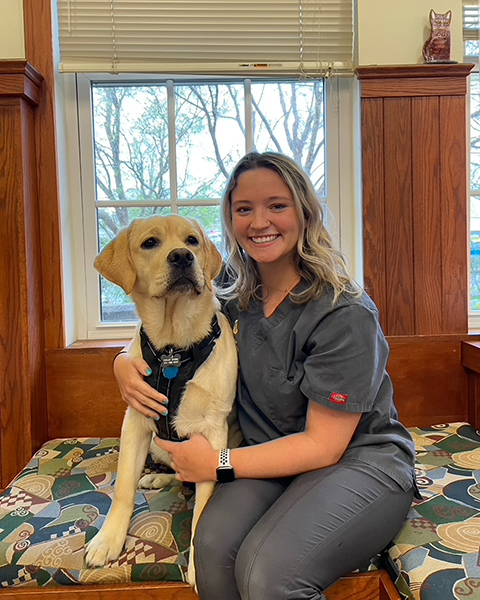 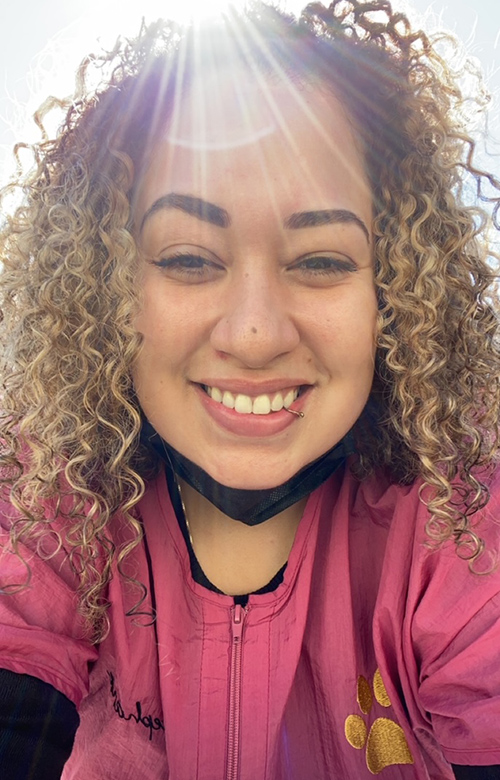 Stephanie was born in Puerto Rico lived there for 6 years before moving to Maryland in 1996. Her love for animals started early, as she grew up on a farm and both her parents are veterinarians. At the age of 9 she was in the 4-H program where she showed sheep and goats.

Stephanie’s career in the animal care industry began in 2014. She started as an animal care specialist at a local Pet Retreat, where she completed OPC training (Outstanding Pet Care and learning Center) and then went on to become a groomer’s assistant while completing a professional pet grooming certification course from Animal Behavior College. She has taken many courses in pet care and knowledge as well as a pet CPR certification. She saved a dog’s life during a medical emergency. After a 3 month ex-internship program at a high level salon, she began grooming at Petsmart where she graduated from their grooming academy as well. Following her time at Petsmart, she worked at Columbia Pike Animal Hospital as a groomer and in her first year of employment with them she became their lead groomer. Recently, Columbia Pike unfortunately, made the choice to no longer offer grooming services and expand the hospital. She was working in Maryland at a private owned salon. Stephanie has combined a true passion and an artistic eye to drive her to be an exceptional and professional dog groomer.

She draws upon her background and understanding of dog behavior to assist her in the grooming process. Her passion for animals and calm demeanor give her the ability to connect with your pet’s individual needs and keeps them comfortable throughout the grooming process. She enjoys doing seminars on the importance of pet care and grooming needs to the kids of Club SciKidz, an Emergency Veterinarian Summer Camp.

Ginny has been with us since 2021, starting as a kennel staff member and is now our Kennel Manager.  Since she was a child, she had a passion caring for her four legged family members, and now she loves caring for yours.  Her son Silas and this hospital are the 2 loves of her life.